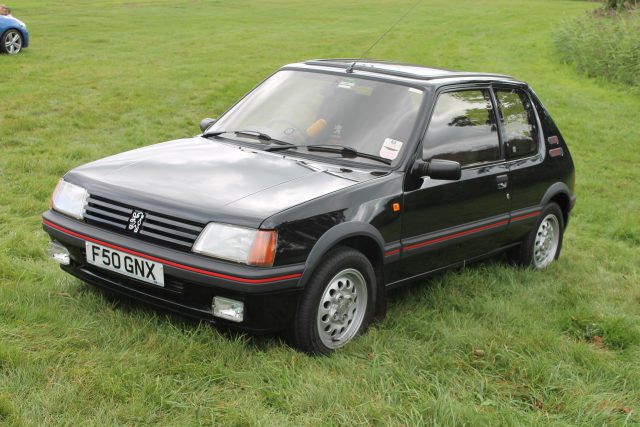 The Club was founded in 1985 when it was known as the ‘Peugeot 205 GTI Club’.  The Club was started by Peugeot UK to help owners gain maximum pleasure from their cars as part of their marketing strategy.  In 1988 the organisation of the Club was handed over to a small team of enthusiastic members who were Officers of the Club.  With the huge spectrum of models that Peugeot now manufacture, Club membership is open to all Peugeot owners, whether it is old or new.  Although all Peugeot owners are now included one thing that hasn’t changed is that it is a ‘Club of members, for members’.

The first major change to the Club was in 1987 when the 309 GTI was introduced and the ‘205’ dropped from the name, so becoming the ‘Peugeot GTI Owners Club’  Then a year later in April 1988 it was announced that the Club would cease to be run by Peugeot and was handed over to an organising Committee.  Since then the Club has opened its doors to all sporting variants of the Peugeot marque that resulted in a further name change in 1995 to the Peugeot Sport Club.  In 2003 the Club was invited by Peugeot to change its name once again to Peugeot Sport Official Owner’s Club – a major milestone for an independent club.

In 2010 we were again asked by Peugeot to change our name to the current one, Peugeot Sport Club UK and revised our branding in addition.  The Club now has members with just about every model produced to date, with the latest influx coming from the 308 GTI, 208 GTI and RCZ models, alongside the ‘classics’ such as the 205 GTI / CTI, 309 GTI / Goodwood and 205 1FMs to name just a few.

Ever since its inception the Club has had its own magazine called ‘Torque’, a full colour publication, issued to members four times per year and to date there have been 150 issues as of 2019.  This is just one of the many benefits that Club members have, as well as a large list of companies that give discounts, and preferential insurance schemes along with preferred rates on many merchandise products that the Club has arranged.  During the 1990’s it was recognised that the Club needed a presence on the internet, and the Club’s first website was created.  This was modified and added to over the years until in 2008 it was decided to completely re-write the website to bring it up to-date.  This was further completely updated in 2019 to the current version which includes a modern easy to use shop and membership process.  The current version of this site is the product of the evolution of the forum.  It has been designed to be kept up-to-date and has a huge repository of documents already that are a unique source of Peugeot history since the 205, and are well worth viewing.

The Club has an active membership and large selection of local groups that get involved in trips, meets and events in the UK and abroad.  They have previously organised continental and UK road trips and have visited France, Belgium, Germany and Luxembourg on some great adventures.  Nearer to home there have been several years of Lake District and Yorkshire Dales tours and for those who like to go a little quicker, a particular favourite is our annual attendance at the Curborough sprint track at Easter each year.